The panel will focus on the conference theme for Telecommunications and Navigation for Space Exploration and Earth Observation.  Panelists will include Senior Technologists and Senior Managers from Major Aerospace Corporations and Space Agencies.  They will be discussing both their future needs and technology development efforts underway to meet those needs along with insight to their organizations plans for the future. 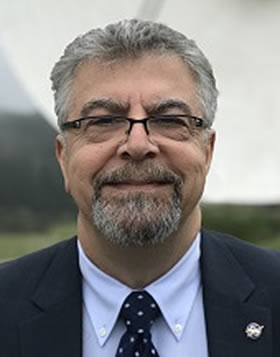 Badri Younes, Deputy Associate Administrator and Program Manager for Space Communications and Navigation (SCaN), is responsible for NASA’s space communications and navigation infrastructure and services, as well as data standards and spectrum. Younes manages the SCaN Program Office at NASA Headquarters and oversees all NASA communications and navigation projects and networks, including NASA’s Space Network (SN), Near Earth Network (NEN) and Deep Space Network (DSN). He is also responsible for the development of enabling technologies critical to meeting the Agency’s vision for an integrated SCaN architecture aligned with NASA’s future space exploration needs.

Antonio Franchi, D/TIA, ESA, The Netherlands, works at the European Space Agency as the Head of the 5G and 6G Strategic Programme in the Telecommunications & Integrated Applications Directorate. Antonio has over 30 years of experience in the satellite telecommunications industry.
Prior to ESA, Antonio worked for over 20 years with a major global satellite operator, spearheading a new generation of satellite communications systems, covering various technical and managerial responsibilities for design, development, implementation and operation of advanced satellite systems and networks. Antonio received an MSc in Electronic Engineering from the University of Rome and an MBA from the London Business School. He is author of 30+ articles and papers published at international conferences and professional magazines, and he holds six international patents in the satcom field.

Naoto Kadowaki, NICT, Japan, received B.S. in communications engineering, Master’s degree of information engineering, PhD of Information Science from the University of Tohoku, Sendai, Japan in 1982, 1984 and 2010 respectively. From April 1984 to March 1986, he was with Mitsubishi Electric Corporation. He joined Radio Research Laboratory (RRL), currently reformed as the National Institute of Information and Communications Technology (NICT) in 1986. He has involved in research and development of mobile and personal satellite communications, satellite communication protocols, and broadband satellite communication systems acting as a head of WINDS project in NICT. From July 1990 to June 1991, he was a visiting researcher to AUSSAT that was reformed as OPTUS Communications, Sydney, Australia. After he was with Advanced Telecommunications Research Institute International (ATR) as the Head of Department of Autonomous Systems and the Head of Department of Smart Networks from July 2004 to December 2006, he was the Managing Director of Strategic Planning Department in NICT from January 2007 to June 2008, Director General of Wireless Network Research Institute from July 2008 to June 2013, Executive Director of Strategic Planning Department from July 2013 to March 2016, Senior Executive Director of NICT from April 2016 to March 2017. He is currently Vice President, a Member of Board of Directors of NICT. He is a member of the IEEE, AIAA and Fellow of IEICE of Japan.

Marco Brancati began his career at Selenia Industrie where he dealt with System Analysis activities for the Electronic Defence Division, prior to moving to the Telespazio Group in 1990.Since mid-2016 Marco has been the Chief Technology & Innovation Officer, and has been responsible for Information Technology as well for whole Telespazio group since June 2021. His prior experience includes: subsystem project manager for the Italsat F1 and SAX satellite missions, Program Manager for the Operations Engineering and O&M activities relevant to the Iridium and Astrolink programs, Key Account Manager for EC and Eumetsat, and management of the Telespazio Studies Unit within the Studies and Innovative Projects Business Unit. He was also responsible for Telespazio Institutional Programs (Sicral 1B and Athena-FIDUS among the others), and he served as the Head of Marketing & Commercial Planning. In September 2008 Marco was appointed Vice President of Telespazio Network & Connectivity Business Line, responsible for the development of all TLC and TV programs and products in the company. In February 2011 he was appointed Senior Vice President of Network & Connectivity Business Unit at the group level. In the same year he completed his Executive Leadership Program at London Imperial College.

Rabindra (Rob) Singh, SpaceLink, USA, as CTO at SpaceLink, Rob provides executive leadership in implementing the company’s technology strategy and vision. He leads a multi-disciplined team with expertise in leveraging innovation for the development and implementation of an end-to-end space communications system. Under his leadership, SpaceLink is developing an end-to-end transport relay solution leveraging innovation in software defined relay satellite constellation in MEO, ground network with RF V/Q band gateways, client optical user terminals, and cloud-based network management data distribution systems. Rob was previously VP of Strategy Initiatives and Chief Architect at Maxar Technologies, where he developed business strategy and technology roadmaps for disruptive solutions across the communication and earth imaging domains. He holds bachelors and masters engineering degrees from the University of Waterloo, Canada and a Corporate Innovation Certificate from Stanford University Graduate School.

Oscar Pozzobon, Qascom, Italy, co-founder, President and CEO of Qascom. He received a bachelor in information technology from University of Padova, a Master in Telecommunication Engineering from University of Queensland, and a Phd in Aeronautics and Satellite applications from Centre of Studies and Activities for Space, University of Padova. He has been involved in the last 20 years in the design of all major European programs of satellite Navigation including Galileo and EGNOS and has been a pioneer of GNSS Security and authentication, with more than 50 publications and 3 patents on this topic. He has been mission manager of several GNSS space missions including the SCaN testbed on the ISS with ESA-NASA, Sounding rockets with NASA-ASI, micro satellites experimentations with NASA and the recent Lunar GNSS Receiver Experiment with NASA-ASI. He is adjunct professor for Satellite Navigation and Telecommunications at the University of Padova.

Aude Vignelles, is the Chief Technology Officer of the Australian Space Agency. As part of the senior executive team, Aude supports the Australian Space Agency with strategic technology advice and program delivery to grow a trusted and respected Australian space capability, using advanced insight and engagement with the Australian and international space sector.
Her office sets strategic priorities by developing and updating technology roadmaps across the Agency seven priority areas; identifies and develops domestic and international space programs and support their deliveries; represents the Agency at international technology forums; maintains awareness of the state of the art for the space sector as the Technology Authority for the Agency and sustains strong engagement with the local industry and scientific community. Prior to this role, Aude was the Executive Manager, Satellite & Fixed Wireless Operations at nbn. Aude is space and aeronautics engineer who started her career at the European Space Agency (ESA) in the Netherlands. She became a source of expertise for the test campaign of all scientific programmes run by ESA from their early phase, such as Rosetta. She was appointed Test Manager for the X-ray Multi Mirror mission (XMM), then the largest scientific space program ever carried out by ESA. She then moved to London where she started a career in the broadcast industry and successfully integrated the first digital terrestrial broadcast centre in the world. She continued this career in broadcast and media here in Australia with Foxtel and Austar. She later was appointed Vice President of Technicolor covering all programs in the APAC region. Aude has been living in Australia for the past 22 years and has contributed to the Australian space community through White Papers, events at conferences with the growing start up community in Australia, and promotion for Women in Space and Engineering at universities.

Jason Mitchell, Director SCaN Advanced Comm & Nav Technology, NASA, USA, is NASA’s Systems Capability Leader for Communication and Navigation and the Director of SCaN's Advanced Communications and Navigation Technology Division, where he leads and coordinates research and development activities across the agency.  He is senior researcher with thirty years’ experience focused on astrodynamics and spacecraft communication and navigation technology development.